A cryptocurrency is a digital or virtual currency that is secured by cryptography, which makes it nearly impossible to counterfeit or double-spend. An outstanding feature of cryptocurrencies is that they are not issued by any central authority and that helps it be nearly impossible for the government to affect them.

Most people think that cryptocurrencies are a technology that was developed in the past 10 years. But in reality that is not the case, the history of cryptocurrencies starts in 1983 with David Chaum.

Chaum is credited as the inventor of secure digital cash for his 1983 paper. He held the first annual crypto and cryptology conference, called 'CRYPTO', which subsequently introduced the cryptographic primitive of a blind signature. This innovation cemented the roots for cryptocurrency, which is increasingly being used 40 years on from Chaum's invention.

How do Cryptocurrencies work?

The base of Bitcoin and other cryptocurrencies is blockchain technology. As its name indicates, blockchain is essentially a set of connected blocks or an online ledger. Every block contains a set of transactions that have been independently verified by each member of the network.

Many people, especially experts, agree that blockchain technology is going to serve and be part of many industries like crowdfunding, Government, Insurance, Oil and gas as well as Supply chain.

How to trade CFD Cryptocurrencies?

Trading CFDs of cryptocurrencies is not the same as trading the actual cryptocurrencies. You are not buying the cryptocurrency, so you cannot store it in a wallet as you would otherwise, instead you are buying a contract at the price it is at currently. The trader can speculate if the price will go up or down and profit from it.

Both are leveraged products, meaning you only need to put up a small deposit – known as margin – to gain full exposure to the underlying market. Your profit or loss are still calculated according to the full size of your position, so leverage will magnify both profits and losses.

Limit Prime offers the lowest spread fees and no trading commission. More detailed info on our trading conditions can be found here.

If you would like to start trading today, this is what you need to do: 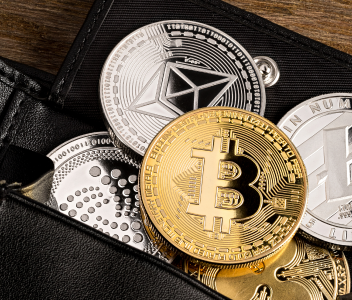 The most popular Cryptocurrency is Bitcoin that was introduced to the market by an anonymous person called Satoshi Nakamoto in 2008. Soon after that, in 2009, it was made accessible to the public.
Bitcoin remains the most traded and valuable cryptocurrency till this present moment.

There are thousands of different cryptocurrencies present on the global market today. We selected the most popular ones, that you can trade on our platform:

Cryptocurrencies are just a new variant of the Digital currencies, but it is important to mention the key differences between the two of them.

Digital currencies are centralized, which means that the transactions made with this currency are registered in a specific network and location that belongs to a bank. On the other hand, cryptocurrencies are decentralized and the regulations within this network belong to a chain of computers that keep track of every transaction.

Also, the other huge difference is transparency.

Digital currencies are not transparent. You simply can’t track every transaction that you have made in the past, also you are not able to choose a wallet address. It is extremely private and well hidden from the public eye.

That is not the case with cryptocurrencies, most of them are transparent, and anyone can access their own transactions and get information such as who received and who sent the transaction.

Digital currencies have wider acceptance than Cryptocurrencies in the global market, thanks to their stability. Digital currencies are understood by the majority of the world’s population and traded, this is the reason why they are considered relatively stable.
When it comes to Cryptocurrencies they are still perceived as a new technology by the world. It's price volatility that makes them unstable, but by gaining attraction and popularity around the globe they are more and more accepted.


Limit Prime Securities is a brokerage company that offers you the possibility to trade with different CFDs cryptocurrencies through our trading platform MT5. When investing in CFD cryptocurrencies we provide our clients support and easy withdrawal process. You will be able to access your money within 24 hours after the request has been made. (48 hours for international transfers)
By using our platform MetaTrader 5, available on PC, Mac OS, iOS, Android, Mobile and Smartphone, you can start your trading journey today.

Before you go, book a
free call with our agent

Ask all of your trading questions and get answers right away.